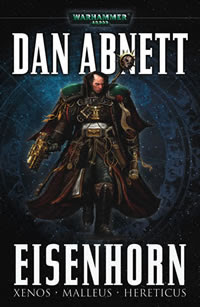 Upon the urging of some at SF Signal (although they may deny it), I took a look at the fiction set in the game universe known as Warhammer 40,000 (produced by Games Workshop). Some further research yielded recommendations from science fiction authors such as David Drake (who is going to be writing a "blurb" for one of the upcoming books) and John Lambshead (researcher, game designer, science fiction author who somehow finds time to play the game).

The big problem is that the game has been around since 1987. So you've got this big massive backstory that hangs around...are the books approachable by somebody who is not familiar with them?

After reading three novels and several short stories, the answer is mixed. Some authors (Dan Abnett) are good enough on their own that you can work past the pseudo-Latin, the handwavium, the unobtainium, and the other wacky bits to enjoy a good story. (The same can be said for any "media-derived" novel: if the characters are good, if the story is good, then it can rise above any "taint" of being associated with such a "non-intellectual" item...but I bet those that decry media-derived works wish they got the money those works did!)

(Addendum upon finishing the Eisenhorn omnibus: I found this omnibus, despite my unfamiliarity with the game's background, to be quite good. If all the Warhammer 40,000 books are as good as this...impossible, but if...the effort will be worth it. At least I have one good author to search for, Dan Abnett.)

So, will I play the game? Not sure about that. I haven't done any gaming in years. But I am itching to pick up some of the miniatures and see if the hands have recovered sufficiently to do some painting!

Addendum (September 22, 2008): A collection of quotes from the game that started it all.

Another creation by Abnett (who is turning out to be a favorite author in this series), the start of the Gaunt's Ghosts stories. Gaunt's Ghosts are a unit of elite infantry from a world overrun by the forces of Chaos and sent on various desperate missions. The series is pretty long (I've found a second omnibus like this one and a large number of paperbacks that have yet to be collected into sets). So far, lots of fun, but not as "baroque" as Eisenhorn was.

Made up of: Welcome to the Sabbat Worlds (introduction); First and Only (novel); Ghostmaker (novel); Necropolis (novel) and In Rembrance (short story).

Showing a icon-bedecked, battle-armor-clad and heavily armed...woman, this was the kind of artwork that had me wondering what the heck the story was all about.

The novel revolves around a few members of the Sisters of Battle, an ultra-fanatic group of armed zealots who hunt "witches" (people with telepathic powers) in the Warhammer 40,000 universe. Sister Miriya is put in charge of transporting a dangerous criminal to a planet when he escapes and puts her to shame. The book revolves around her quest to redeem herself and her unit. Overall, it "feels" more to me like a small campaign in a roleplaying game vs. a series of descriptions of battles (which is what you might think you would get from a book based on a game revolving around miniatures). I did not learn as much about the Sisters of Battle as I did learn, for example, about the Inquisitors (in the Abnett volume, above), but the story kept my attention and (more or less) lived up to the promise of the artwork. I enjoyed it enough to pick up a omnibus of "Blood Angels" books by the author (another one with a nice cover).
Posted by Frederick Paul Kiesche III at 10:44

Email ThisBlogThis!Share to TwitterShare to FacebookShare to Pinterest
Labels: Gaming, Reading, Science Fiction, The Year in Books, The Year in Shorts

The Other Guy said...

You need to read the sandy mitchell books. The Comisar Cain series. They really are the best of the lot. Humor, pain loss, struggle, and incredible situations. Can not recomend more highly. The gaunts ghosts books would be a good place to follow on from there if the universe still holds your interest.

But the cain books. There just good books period.

I have the first Cain omnibus (and wish they would do more of these--I'm finding the omnibus to be a much better buy at their prices than a "normal" paperback). I am reading the first "Gaunt" omnibus, have the second omnibus, and have the third omnibus on order.

I've bought a lot of the Black Library titles, so have quite a backlog. Now I'm looking at the "Dark Heresy" RPG (and the other books in the RPG series)--even if I don't run it as a game, it looks like a fantastic background book.